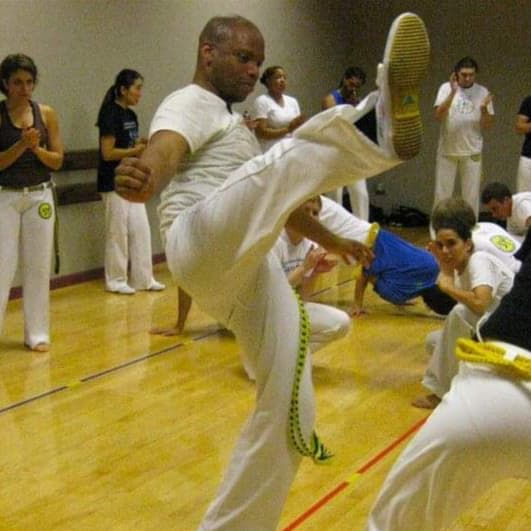 My journey to capoeira was an odd one. Most people will say they liked Eddy Gordo from Tekken, or perhaps they saw Only the Strong, and then they were inspired to look for classes.

I, a weirdo, found it in a less conventional way.

One day in the 90s, I was flipping through channels (as a lazy teenager does), and I stopped at PBS, which was showing a clip of a guy flipping around in a park near San Francisco Bay.

Then a bunch of kids were flipping around.

I was so fixated by the acrobatics and the weird music on percussion instruments, I didn’t even realize I was watching Sesame Street. That was my introduction to capoeira.

I wanted to do it, but alas, they were in San Francisco and I was in Baltimore, and at that time the Internet was stored in large yellow-hued tomes that only went as far as Baltimore County.

10 years passed; I had graduated high school, college, was established in my first “grown-up” job, and got married. Some friends and I went to Patterson Park for a Latin festival, and off to the side, I saw some people flipping around and playing weird music on percussion instruments, and it clicked: “Holy crap! That’s that Brazilian dance fighting I saw on Sesame Street!” I took a business card, but as with business cards handed out at festivals, I set it down somewhere, and it was lost to time.

Five years and one divorce later, I was bored at my new job. I had moved out of Baltimore to upstate New York (Watertown), and gyms were kind of boring. I tried to think of that name of that Brazilian kick-dance thing, and fortunately, the internet was FINALLY in digital form and spanned the world. Typing in “Brazilian kick dance” yielded exactly what I wanted. I found a capoeira school, as well… 70 miles away in Syracuse. Since I was in the middle of nowhere, the hour-long drive two times a week would have been worth it. After all, we would drive down to Syracuse or up to Kingston, ON for less productive ventures on the weekends regularly. I called the number provided and left a message, but I didn’t get a call back.

One year later, I moved from that boring job in Watertown to Rochester for a new, promising opportunity. After a few months of settling in and figuring out my routine, I thought about that capoeira school in Syracuse. I Googled capoeira again and learned that there were two schools right in Rochester: Capoeira Mandinga and (something like) Larry’s House of Kicks and Stuff… The former seemed more legitimate. I said to myself, “It’s now or never. You’re 30, after all,” and I went to my first class on a Thursday.

Save for business trips and vacation, I haven’t stopped going to class in 11 years.

A lot of people tell me they’re interested in capoeira, but their [insert joint] is a bit wonky, or their [insert ligament] is tight. They just need some time to get to 100% before they start.

Others think they are too old, like their time has passed to get into it.

While maintaining the physical/mental safety of your body is always valid, the time to try capoeira is now. I started at the age of 30 with a sprained ankle and chronic asthma, and now I am teaching classes.

When I started, there was a woman who was nearly twice my age with Multiple Sclerosis. One of the best capoeiristas in the academy didn’t have full function of his right arm. Look on YouTube, and you’ll see mestres 60 years old still playing, as well as people who are missing limbs.

In our academy, people bigger and smaller, older and younger than me have joined the academy, even with their “wonky” knees and tight calves. Men and women and intersex people from all walks of life have come through our doors. Capoeira does not discriminate. To be a good capoeirista, the most important thing you can do is dismiss any doubt you have in your ability based on your physical traits.

A teacher early in my training said to us, “Capoeira is for everyone, but not everyone is for capoeira.” Nothing could be truer. Anyone can play capoeira, as long as you truly want to.

Chris Thompson has been training Capoeira since his arrival to Rochester in 2008. He has always been under the tutelage of Contra-Mestre Carcará of Academia com Expressão, a Capoeira Mandinga Academy. Chris has earned (and continues to earn) the rank of Monitor. He is terrible at roller skating.

Contact info@positiveforcemovement.com for information on how to get started learning how to play capoeira at Positive Force Movement!

©Positive Force Movement, LLC, 2015-2018. All opinions expressed on this site are solely those of the author(s) and do not represent the opinions of any company or institution mentioned. Unauthorized use and/or duplication of this material without express and written permission from this site’s author and/or owner is strictly prohibited. Excerpts and links may be used, provided that full and clear credit is given to the author(s) and Positive Force Strength Movement, LLC with appropriate and specific direction to the original content.